It was very enjoyable to meet with John Lawrence earlier this week to be interviewed for his book in progress about the 1974 “Watergate class” of Congress.

We sat for several hours at John’s office at the University of California Washington Center where he is a visiting professor. John knows an enormous amount about Democratic Congressional leadership over the last few decades. He served nearly 8 years as chief of staff to Speaker (and Democratic Leader) Nancy Pelosi as well as spending the previous 30 years as chief of staff to one of my best friends, Congressman George Miller of Martinez, California. John is a true legislative and political pro and it is fun to read hardline political news and analysis in his DOMEocracy Blog.

Thinking back to my initial election to Congress in 1974, as a moderate Democrat running for office for the first time it was totally unexpected that I would be elected in a majority Republican district. As I told John, no one thought I had a chance to win. The post-Watergate mood resulted in many Republicans staying home on election day and I was elected with 53% of the vote.

Coming to Congress as part of that large 1974 Watergate Freshman Class, I had a very different profile than many of my liberally minded Democrat colleagues who had run against President Nixon. They were all very fired up about liberal issues and shaking up the traditional Congressional leadership structure. 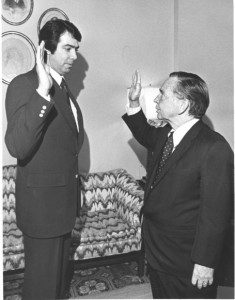 Marty Russo being sworn into office on January 3, 1975 with Speaker Carl Albert.

Those first few years, I didn’t always agree with that agenda. In contrast, I was a former State’s Attorney prosecutor so I was tough on crime, fiscally conservative, and very respectful of tradition and precedent. My campaign focused narrowly on issues important to the district. I’m not even sure we ever mentioned the national issues that my new Congressional Democratic colleagues had pushed in their elections.

It was interesting to answer John’s insightful questions and tell the story of those initial years in Congress and my first attempts to learn the inner workings of politics and the legislative process. I am fortunate that I developed many friends in all political factions: Moderate Democrats, Conservative Southern Democrats, Moderate Republicans, Conservative Republicans, … and eventually Liberal Democrats.

In those days of the 1970’s and 1980’s, it was possible to create strong friendships across the political aisle. We may have disagreed on a legislative issue, but when we played a competitive game of basketball or went traveling in a CODEL, we were just people who could discuss issues and respect each other’s perspective.

It doesn’t seem like that is the case now. There has always been partisanship, but I am not seeing those personal friendships across the aisle that can bridge the gap in understanding and respecting opposite points of view.