As an Italian-American in Chicago, one of the iconic experiences is the yearly Columbus Day Parade put on by the Joint Civic Committee of Italian Americans.

Each year, it was an honor to march in the parade along with such dignataries as the mayor, the governor, state senators and representatives, local officials and other community leaders. In 1986, it was an especially rewarding experience as my good friend, then Vice President George H. W. Bush agreed to join us along with his wife, Barbara Bush. 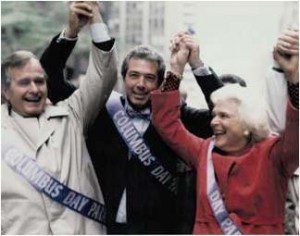 This photo with the Bushes is very special to me as it shows the close friendship and camaraderie we felt.
I have to admit there were a few raised eyebrows when the Republican Vice President walked the entire parade alongside a Democratic Congressman.  Indeed, later that day, the VP went on to several fundraisers for Republicans.It was the magic of sports that made us become close friends — first as the paddle-ball partner for the VP (and later President) as well as being golf buddies. 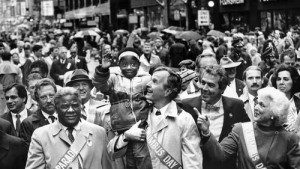 It’s a reflection on the goodness and kindness of GHWB that when a small child ran out from the crowd toward the Vice President, he scooped him up without hesitation into a welcoming embrace.  It was totally spontaneous and the crowd loved it.  Mayor Harold Washington was marching with us and this photo by The Chicago Tribune showing VP Bush and young Rafael Thompson was front page news.

Its a good feeling to view this photo almost 30 years ago and remember the warmth on that (probably) cold Chicago day.